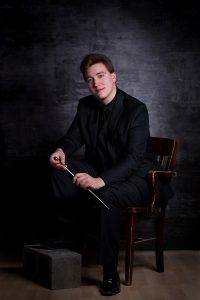 Aaron Hirsch is in his fourth year on the conducting staff for the Yakima Symphony Orchestra during the 2019-2020 season. In addition to conducting YSO’s annual Student Concerts, his duties include rehearsal assistance for the music director, management of multimedia enhancements for YSO concerts, and filling in as substitute conductor in the unanticipated absence of the music director. Outside of his duties with the Yakima Symphony, Hirsch is building a career for himself as a conductor, collaborative pianist and educator in the Pacific Northwest.

As a conductor, Aaron has served as apprentice conductor with the Wenatchee Valley Symphony Orchestra from 2014-2016, and in his home state as artistic director and conductor of the Young Musicians of Minnesota, as well as apprentice conductor with the Minnesota Youth Symphonies. The Young Musicians of Minnesota was an intensive summer program that ran during the summers of 2013-2015. With this program, young people aged 12-26 came together to learn advanced repertoire, receive coaching sessions with members of the Minnesota Orchestra, and perform alongside these musicians in a full-length symphonic concert; all of this for a very small fee, allowing exceptional youth of little means to experience a high-caliber festival and learn important repertoire. Aaron has also enjoyed success as a fellow in the Oregon Bach Festival Conducting Master Class, as well as the Dresdner Meisterkurse Musik (DMM) where he appeared in concert with the Dresden Philharmonic Chamber Orchestra.

Hirsch is also employed as adjunct professor of orchestra studies at Central Washington University, where he conducts the chamber and opera orchestras and teaches the basic conducting sequence for undergraduates along with the advanced conducting seminar for grad students. In addition to his duties as a conductor, Aaron is also in demand as a collaborative pianist. He has performed countless recitals with students of both voice and instrument, and he has toured the Pacific Northwest with Professor of Saxophone Adam Pelandini in a series of recitals. Hirsch also serves as vocal coach and pianist for the CWU opera and opera scenes programs. Aaron has appeared as an adjudicator for piano and orchestra festivals around the state.

Aaron is also in demand as an organist, and he appears as a recitalist in Washington, Minnesota, and Wisconsin regularly. He also teaches workshops on liturgical organ effectiveness in those regions. Hirsch has degrees in conducting (MM, Central Washington University) and organ performance (BM, University of Minnesota).