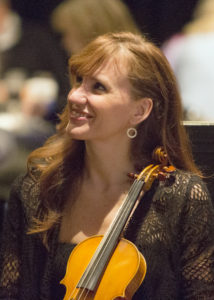 Denise Dillenbeck is a versatile musician, with a strong background in orchestral, chamber and solo playing. She has toured Europe and America with the Philadelphia Orchestra, and has played with the Seattle Symphony, Baltimore Symphony, Pennsylvania Ballet Theater, Philly Pops, and was a member of the Oregon Symphony. She is currently concertmaster of the Yakima Symphony, York Symphony, Lake Chelan Bach Festival Orchestra and the Northwest Sinfonietta. She was associate concertmaster of the Tacoma Symphony and has served as concertmaster for orchestras across the states and in England and Germany.

Denise performs chamber music with Sage Rendezvous, a group that programs colorful cabaret-style concerts, and she and her husband Mark Goodenberger play music for violin and percussion as DuoDG. As a former member of Third Angle New Music Ensemble, she gave world premiere performances of works by some of today’s leading composers. She has performed and coached chamber music on concert series and at festivals around the country and abroad, such as the American Church of Paris, Westminster Choir College, Bravo Summer String Institute, Max Aronoff Viola Institute, Charles Castleman’s Quartet Program and Icicle Creek Summer Academy.

She is passionate about teaching, and has worked with dozens of violin students and young string quartets, and has also taught college courses on music, including a course on viewing world history and literature through the prism of Beethoven. As a teaching artist in the Philadelphia Orchestra’s Community Partnership Program, she led urban elementary school students in experiential music learning, and directed workshops on aesthetic education for classroom teachers and music educators. She is quoted at length in Eric Booth’s book “The Music Teaching Artist’s Bible.” She currently consults on teaching artistry with orchestras around the country, most recently with the Austin Symphony.

The Role of the Concertmaster: As the ‘first chair’ violinist in a symphony orchestra, the concertmaster is the leader not only of the violin section, but of the entire string section and in some ways the orchestra as a whole.  S/he communicates performance style to the string section by physical example and aids in synchronization across the ensemble through gestures and eye contact with other key musicians. In some orchestral music performed without a conductor, the concertmaster actually conducts through this body language while playing. When a conductor is present, the concertmaster remains his or her primary collaborator in realizing the musical interpretation of a composer’s work.

The concertmaster leads all string sections in determining how music will be played, providing markings for all other string players before rehearsals begin that allow them to move their bows together in unison. This is more than mere choreography – changing the direction or placement of the bow, or the number of notes connected through a single gesture, can profoundly change the sound and feeling of a piece of music, so these decisions are critical to achieve a particular quality of performance. The concertmaster also often serves as artistic advisor to the music director on matters ranging from technical performance detail to hiring and other personnel decisions, and s/he functions as the principal artistic representative of the orchestra when a guest conductor takes the podium.

On stage in concert, the concertmaster’s more ceremonial functions include supervising the tuning process, and then leading the orchestra in rising and sitting together for applause. When audience members are allowed to be seated between movements of a longer work, it is often the concertmaster who observes the process and signals the conductor (whose back is to the audience) when it is safe to resume the performance. At the end of a concert, s/he decides when the applause has faded sufficiently for the musicians to stand and leave the stage.  It is customary for conductors and soloists to shake the hand of the concertmaster at the conclusion of a concert in recognition of the prominent role s/he plays as artistic collaborator throughout the preparation and performance of a symphonic program. (© Yakima Symphony Orchestra 2013)