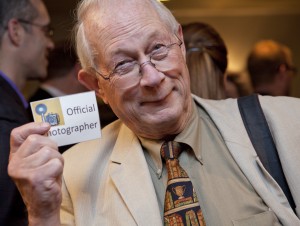 Gary Miller was born in 1937 in Wilbur, Washington to depression-era parents who had grown up on wheat farms in the area. In 1940, his parents moved to Pasco just before the Manhattan Project started at Hanford. Gary’s interest in photography began when his Pasco High School English teacher recommended him to be trained for a position as assistant photographer for the local newspaper, the Columbia Basin News. While still in high school, he chased many fire trucks and even covered a Prosser bank robbery before working full time as the paper’s photographer between his freshman and sophomore years at the University of Washington in 1956. At the University, Gary studied Engineering, but continued his interest in photography as photographer for the campus magazine, “Columns.” Gary never made a career of photography but has always maintained his interest in this wonderful art medium.

Gary’s first job after graduating from UW with a MS Degree in Metallurgical Engineering involved plutonium research at Hanford in 1962. He had a wandering spirit and several times left Hanford to pursue an entrepreneurial idea such as gold mining, or a more far out idea such as frost protection for fruit trees or an even more far out idea such as a machine to automatically inject antibiotics into turkey eggs at a rate of 20,000 eggs/hour. He would try these ideas and, if or when they did not work out quite like he had envisioned, would return to Hanford to build up the bank account for the next endeavor. Later on in Gary’s buy tramadol site online career, when thinking about retirement became a priority, he settled down and worked at Hanford on activities that involved using the Hanford Site’s excess assets for economic development of the Columbia Basin. He won the Distinguished Project Award from the National Council for Public Private Partnerships in 1996 and received a presidential recognition from then Vice President Al Gore for using a multi-million dollar government metal extrusion press at Hanford to attract Kaiser Aluminum to the City of Richland to make baseball bats. Gary has accumulated several patents during his career: three for injecting fertilized eggs with antibiotics, one for a process to retard the bloom of fruit trees in the spring and one for a process to produce nuclear reactor control rod plates.

Gary is married to Judy Frisbie, a retired Yakima teacher who graduated with Gary from Pasco High in 1955. Gary and Judy had not seen each other since high school when they went to their 50th high school reunion in October, 2005. Both were single at the time. They hit it off and were married the following summer. As of 2013, they together have eight children, 23 grandchildren and nine great grandchildren. Gary loves to downhill ski. He has bungee jumped, sky dived and piloted small planes. He especially enjoys time with his grandkids. He is a member of the Yakima Downtown Rotary and has been a Rotarian for almost 25 years. Gary is passionate about digital photography. He photographs for the Yakima Symphony Orchestra and the Larson Gallery.