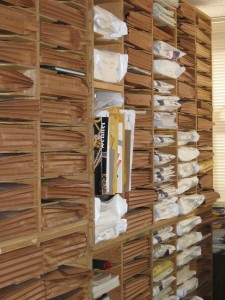 The Orchestra Library plays a critical role in the process of bringing musical performances to the stage, from the earliest plans for a given season through the final rehearsals for each concert many months later. Long before a season begins, as the music director is planning programs and repertoire, the orchestra librarian is researching whether performance materials are already in the music library, or if not what editions are available to be purchased or must be rented from a publisher.

After music has been ordered and has arrived, it must be prepared for use. Each string part must be marked according to detailed instructions from the principal (leader) of each section – not only so that the entire section is visually choreographed, but also so that each player has the same cues regarding phrasing, bow technique and other factors that affect the way the music will be shaped. Often music arrives with different rehearsal indications in the parts than in the score, so that measure numbers and other ‘signposts’ must be added to all parts in order for the conductor and musicians to communicate efficiently in rehearsal. Any cuts or other instructions from the conductor also must be added to each part, and special 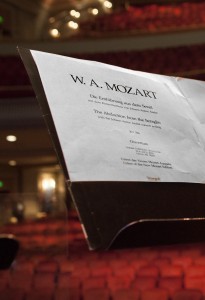 performance situations (unusual instruments, offstage performers, etc.) must be arranged with the musicians involved prior to distribution of the music. This process can take up to twelve weeks leading into a performance, or even more depending on the number of works on the program and the condition of the music when it arrives.

Between two and four weeks prior to each concert, the music is organized into individual folders and distributed to the musicians. This requires close coordination with the orchestra personnel manager to be certain which musician is playing which part. At each rehearsal, the music librarian is present to address any remaining problems with the music that may come to light – missing measures, missing parts, additional page copies for impossible page turns and so forth. After the final performance, the librarian collects and organizes all of the music and either files it in the library or returns it to the publisher. (© Yakima Symphony Orchestra 2013)

The Yakima Symphony Orchestra Library is sponsored in part through a generous bequest from
Marvin Sundquist.
For information on how you can help support the orchestra library,
please call the YSO office at (509) 248-1414.