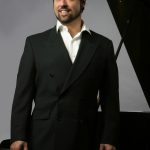 Credited with “piano playing at its most awesome” (New York Times), pianist Steven Mayer has brought his unique repertoire of such jazz icons as Art Tatum and Fats Waller, as well as music from Mozart to Liszt to Ives, to thousands of listeners worldwide. Mr. Mayer has performed with the Leipzig Gewandhaus and Emmanuel Krivine in Liszt’s Concerto in E-flat; in appearances with Leonard Slatkin and the Minnesota Orchestra in Gottschalk’s Grand Tarantelle and with co-soloist John Browning in Mozart’s Concerto K.365 under Raymond Leppard; performances with the San Francisco Symphony under Edo de Waart and Herbert Blomstedt in Rachmaninoff’s Rhapsody on a Theme of Paganini and the Reger Piano Concerto; with Gerard Schwarz conducting the New York Chamber Symphony in Beethoven’s Concerto No. 4; in a performance of Beethoven’s Concerto No. 3 with the Rotterdam Philharmonic and James Conlon; with Dennis Russell Davies conducting Leon Kirchner’s Concerto No. 2 with the American Composers Orchestra in Carnegie Hall; performances of Mozart Concertos K.595, K.414 and K.482 with the St. Louis and Baltimore Symphonies under conductors Catherine Comet and David Atherton; appearances with the Amsterdam Philharmonic under Ken-Ichiro Kobayashi in Rachmaninoff’s Concerto No. 3; a performance with the Netherlands Chamber Orchestra and Antonio Ros-Marba in Haydn’s Concerto in G; performances of Mozart’s Concerto K.595 with Hugh Wolff conducting the Atlanta Symphony; appearances with the Dallas Symphony under Walter Hendl in Ravel’s Concerto in G; performances with the Boston Pops and Keith Lockhart in Liszt’s Totentanz; and an appearance with the Prague Symphony under Jiri Belohlavek in Dvorak’s Piano Concerto on the Carnegie Hall International Orchestra Series.

In 2015, Mr. Mayer was one of three pianists chosen worldwide to perform the complete works for piano and orchestra of Franz Liszt with the Wiener Akademie Orchester at Liszt’s birthplace in Raiding, Austria. In the same year, Steven Mayer’s ASV album Liszt versus Thalberg was chosen by Gramophone for having the best solo version of Weber’s Konzertstuck on disc. Mayer’s album 15 Art Tatum Solos (ASV) also has earned worldwide praise, as has his recording of Max Reger’s Concerto with the Hague Philharmonic under Ernest Bour (Leonarda).

In 2002, Steven Mayer began a lifetime association with Naxos Records. In 2011, Gramophone chose Mayer’s Naxos recording of Charles Ives’ “Concord” Sonata as one of the top three in its fifty-year discography of the work.

In 2013, Mr. Mayer’s Naxos album Liszt’s Wagner and Weber Transcriptions was honored by Wagner Haus in Tribschen, Switzerland for its Wagner Bicentennial. Mayer’s recital of works featured on this disc—played in Wagner’s own house and on Wagner’s own piano—was broadcast live by Swiss National Radio.

In 2015, Naxos released Steven Mayer’s Gottschalk album, A Night in the Tropics. Critic Anthony Tommasini of the New York Times wrote of this CD, “The brilliant pianist brings dazzling virtuosity and playfulness to Gottschalk.”