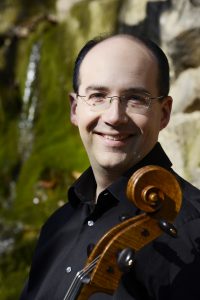 Mark Kosower A modern player with a “signature sound” and distinctive style of playing, cellist Mark Kosower embodies the concept of the complete musician: performing as concerto soloist with symphony orchestras, in solo recitals and with pianist Jee-Won Oh, and as a much admired and sought-after chamber musician. He is principal cellist of the Cleveland Orchestra, and he is a scholar and teacher of cello at the Cleveland Institute of Music and the Kent/Blossom Music Festival.

Mark’s performance repertoire and discography are testaments to a deep devotion not only to frequently heard repertoire such as Tchaikovsky’s Rococo Variations and concertos of Haydn, Walton, Elgar and Dvořák, but significantly to less well-known concertos of Alberto Ginastera, Miklos Rozsa, Frederich Gulda and Victor Herbert. Mr. Kosower has recorded for the Ambitus, Delos, Naxos International and VAI labels. He was described as a “powerful advocate of Ginastera’s art” by MusicWeb International, and Strings Magazine noted of his Hungarian music album (also with Naxos) that “the music allows Kosower to showcase his stunning virtuosity, passionate intensity, and elegant phrasing.”

Kosower is known for varied traditional and contemporary repertoire. His many honors include an Avery Fisher Career Grant, a SONY Grant, and top prize in both the Rostropovich and Pablo Casals International Cello Competitions, among others. He as appeared as soloist with symphony orchestras throughout the US, Europe and Asia, and in recitals at the Kennedy Center, the National Gallery of Art, the Chatelet in Paris, and on the Great Performers Series at Lincoln Center. [Photo by Lim Jong Jin]