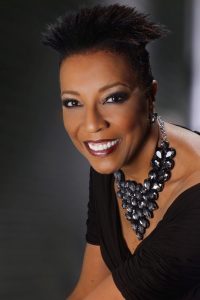 Dee Daniels is a crowd pleaser and a musician’s musician. Whether accompanying herself at the piano, fronting a trio, big band or symphony, she is a unique talent who transcends musical borders when she brings her jazz styling, infused with gospel and blues flavoring, to the stage.

The stepdaughter of a Baptist minister, Dee was born and raised in Oakland, California. Though she graduated with a BA degree in Art Education, music was always a big part of her life. However, she didn’t discover her true calling to it until after teaching art in a Seattle high school for a year. She then joined a band, resigned her teaching position, and the rest is history!

Since that day, Dee has traveled throughout the world with her music. She has shared the stage and/or recorded with numerous legends of jazz including Houston Person, Monty Alexander, John Clayton, Russell Malone, Cyrus Chestnut, Ken Peplowski, and Lewis Nash to mention a few. Her diverse career has seen her in clubs and prestigious music halls around the world, on theater stages, television and radio, performances for royalty, international dignitaries, and on many recordings as leader or guest.

Dee also has established herself as a jazz vocalist in demand by the classical world, performing her three symphonic Pops programs with orchestras in the United States, Canada, and Europe.

Organizations and institutions in and out of the music industry have recognized Dee with awards for her contributions in music, education, fundraising and community service. [Photo by Devon Cass]