A program of works composed in America: two works by American composers,
Aaron Copland and Grammy winner Joan Tower,
along with a famous concerto by Antonin Dvořák
written while he was living in New York,
performed by Cleveland Orchestra Principal Cellist Mark Kosower 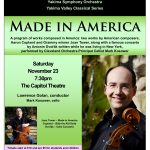